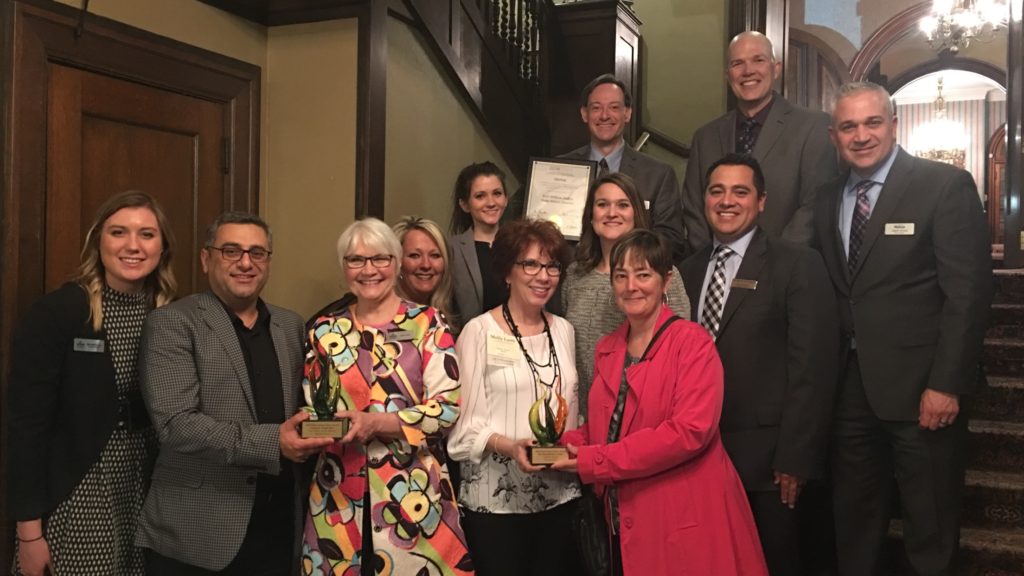 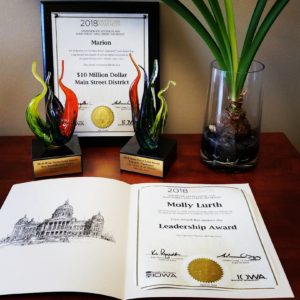 Main Street Iowa hosted the 32nd annual Main Street Iowa Awards celebration on Friday, April 13, 2018 at Hoyt Sherman Place in Des Moines. The program honored the efforts of those who work day in and day out to revitalize Iowa’s downtowns – the heart and soul of communities across the state.

Main Street Iowa has annually presented awards honoring outstanding accomplishments, activities and people making a difference in Main Street districts throughout the state. Projects large and small are recognized and serve as outstanding examples of what historic commercial district revitalization is all about.

This year, 18 projects were selected to be recognized from the 117 competitive nominations submitted. The honors were presented by Governor Kim Reynolds and James Engle, director of the Iowa Downtown Resource Center (IDRC).

“The Main Street Iowa program is a powerful catalyst for local revitalization and community investment,” said Governor Reynolds. “As I travel across the state, I see over and over that Main Streeters are passionate, innovative and creative. They’re also committed to making their downtowns – and our state – a stronger, more sustainable place to live, work and raise a family.”

During the event, 13 communities were recognized for reaching significant benchmarks for the private dollar investments made in the purchase and revitalization of properties within their respective commercial districts. Avoca was recognized for reaching the $1 million-dollar benchmark in the last year and Fort Madison and Manning were honored for $3 million in local investment. Ames, Greenfield, Marion, Mount Vernon, Washington and Woodbine all attained the $10 million-dollar benchmark level. Mount Pleasant was recognized for achieving $20 million in local investment since being designated a local Main Street program in 2002 and Cedar Rapids’ Czech Village – New Bohemia, Marshalltown and West Des Moines reached the $50 million-dollar benchmark.  The communities of Belle Plaine, Mount Vernon, Washington and Woodbine were recognized for 10 years of participation as designated Main Street Iowa programs.

Two special awards were presented during the evening. The Spirit of Main Street Award recognizes a person, organization, community or project that demonstrates the spirit of “Main Street at Work” in Iowa through innovation, support and commitment to economic development within the context of historic preservation. This award was presented to Darla Ubben (posthumously) of Conrad, Iowa. The Signature Project Award recognizes an outstanding project that rises above the traditional award categories. This award was presented to representatives from the City of West Des Moines and the Historic Valley Junction Foundation for their involvement in the CoSign program in Historic Valley Junction’s historic commercial district.

In 1985, the Iowa Legislature adopted the National Main Street Center’s Four Point Approach® to district revitalization by establishing Main Street Iowa within the agency that is now the Iowa Economic Development Authority. Since its inception, the state program and its communities have been considered examples of excellence in the national effort to revitalize historic commercial districts across the country.

Since 1986, local Main Street programs have made a significant impact on Iowa’s economy, resulting in:

For more information about Main Street Iowa and how all Iowa communities can access commercial revitalization assistance through the IDRC, visit iowaeconomicdevelopment.com/MainStreetIowa, email mainstreet@iowaeda.com  or call 515.348.6184.

A list of the awards presented during the ceremony follows.   Photographs will be posted at iowaeconomicdevelopment.com/MainStreetIowa after April 17.